Skip to content
Yorkie Universe may earn a small commission for purchases made after clicking some links on this page. 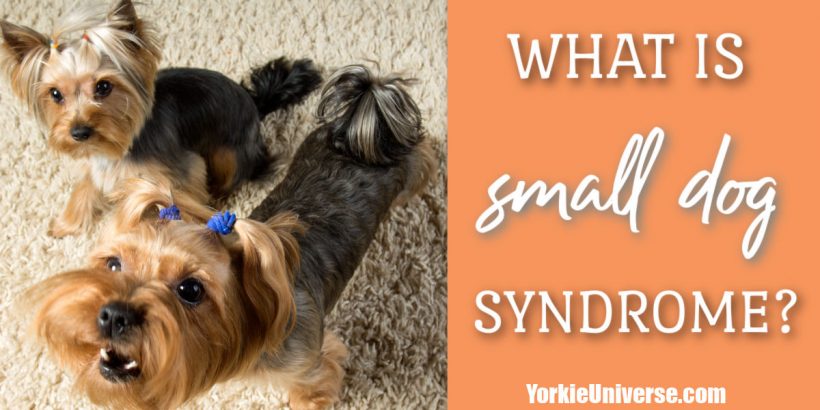 Small Dog Syndrome – while seemingly just a funny term to describe small pups with larger than life attitudes, you may be surprised to know that this is actually a common set of characteristics often displayed in small dogs.

You may also be surprised to know that “Small Dog Syndrome” largely makes up for why small dogs are often considered to be “yappy” or exhibit more dominant behavior than many larger breeds. Because of their size, teacup, miniature, or toy dog breeds such as the Yorkie are often allowed to exhibit this sometimes aggressive behavior since they don’t appear as threatening as larger dogs.

As a result, little dogs are often allowed to get away with this problematic behavior, with their owners considering it cute and unthreatening, when they contribute towards the smaller dog’s own view that they are the dominant one in this relationship.

It’s important to remember that little dogs don’t realize they’re little – they’re under the impression that they’re the same size as any other dog out there and just as threatening! The difference is, we don’t discourage this behavior from a young age, resulting in Small Dog Syndrome. If you’re worried that your tiny dog may be headed down this very same road, keep on reading.

What Are Common Behaviors of Small Dog Syndrome?

Several behaviors may indicate that your Yorkie or other tiny dog is developing Small Dog Syndrome. These behaviors include, but are not limited to the following:

Jumping is often a behavior that we don’t really mind, especially when it comes in the form of your dog jumping onto your lap for a cuddle. While this may seem like an adorable display of affection from your pup to you, we shouldn’t be allowing our dogs to jump up on our laps and certainly not without a command.

Unfortunately, jumping up onto your lap whenever they like it is your dog’s way of saying, “I own you,” establishing their dominance in the relationship. This can contribute to more dominant and aggressive behaviors down the line, including your dog becoming territorial of you.

While growling can be quite a frightening trait in a larger dog, we generally don’t think twice about it when it comes to a smaller dog. It’s a fact that acceptable behavior tends to be determined by how intimidating your dog is in size and stature; this should never be the case. If your tiny dog growls at you or a guest in your home, you should make it clear that this is unacceptable behavior, in the exact same way that you would when dealing with a big dog.

Tugging on the Leash

Small dogs are just as likely as larger dogs to tug on the leash when going for a walk. This may be because they’re excited or have too much pent up energy. However, this may also be that they’re asserting dominance over their owner, believing that they can get away with this behavior.

We’re a lot less likely to reprimand a dog that’s pulling and tugging on their leash when they can’t knock you over. However, this is another instance where you must treat a small dog exactly as you would a larger dog. As your pup’s owner, you should always lead the way, with your dog either walking alongside or slightly behind you.

One of the most common characteristics of Small Dog Syndrome is, of course, yapping. Many dog owners will shy away from smaller dogs simply because they don’t want a “yappy” dog. In reality, this is a learned behavior and not directly the result of your pup simply being small.

You’ll often notice that yappy dogs consider themselves the leader of the house and largely lack discipline. If it is made clear that your pup is not the house leader, your dog should become less vocal. It’s important to teach your dog both the “speak” and the “quiet” command, so you can regain some control over your small dog’s vocalizations.

Unfortunately, Small Dog Syndrome is often directly the result of a small dog owner being much more lenient with their small furry best friends than they are with their larger ones. Due to their size, we often treat tiny dogs like our own little babies, being carried around everywhere and rarely reprimanded for their bad behavior.

In reality, we have reinforced their negative behavior, which will only worsen the longer we allow it to continue. Small dog owners are less likely to train their smaller dog than their larger dog, which is largely why smaller dogs appear to be spoiled and disobedient.

So, is it really possible to improve Small Dog Syndrome after it appears that the damage has been already done? In the case of Small Dog Syndrome, the owner’s behavior directly influences the behavior of their pup. So, as much as it may be a heavy adjustment to your tiny dog, there are certain methods you can try to improve their unwanted behavior, including:

It’s important to be prepared to witness some changes in your dog’s personality – after all, they’re no longer the dominant force in the relationship. Submissive behavior such as their ears being back and their head down does not mean they are sad. This means that they are no longer challenging you for leadership, which is a good thing!

While it can be tempting to let your little prince or princess have the run of the house (after all, they’re just a little dog!), this is not the way to think if you want a friendly, balanced, well-socialized companion.

I have always loved Yorkies and got my first on when I was 19. I bred and showed them back in the 80’s. Though I love other breeds too, Yorkshire Terriers will always be my first love. I have lived and worked with dogs all my life.

Hi I'm Cathy and I have adored Yorkshire Terriers since I was a child. I have lived with dogs all my life and have had many jobs working with them as a kennel worker, a dog groomer, a pet hotel clerk, and as a dog breeder. Now I just write about them and I'm a dog mom of 3 sweet pups.

As an Amazon Associate I earn from qualifying purchases.