Please ensure Javascript is enabled for purposes of website accessibility Skip to Content
This post contains affiliate links, and I will be compensated if you make a purchase after clicking on my links. As an Amazon Associate I earn from qualifying purchases. 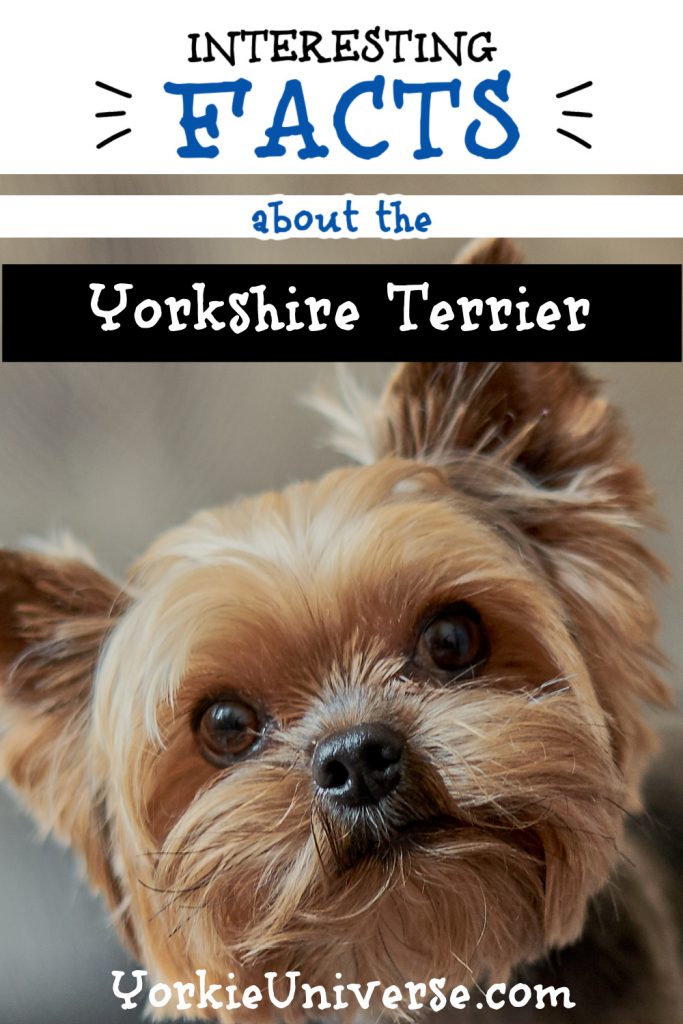 The Yorkshire terrier is a small, sturdy dog that originated in England. It has been used as both a hunting and companion animal for centuries. Today it remains popular among pet owners because of its friendly nature and ability to adapt well to almost any environment.

Here are some interesting facts about the Yorkshire Terrier breed that will totally convince you to get one.

What were Yorkshire Terriers originally bred for?

Yorkshire Terriers were initially bred as working dogs in the mid 1800’s..

The Yorkie itself was bred to be ratter in mines, mills, ships and on farms. Their tenacity and small size made them very good at catching vermin.

Though they were originally bred as ratters they have since become companion animals.

We have a more in-depth post about the history of Yorkies.

Signup for our weekly newsletter with tips, dog facts and more, and get a free printable pet planner!

How many Yorkshire Terriers are there in the world?

The number of Yorkshire terrier puppies born each year is estimated to be between 1.5 million and 2 million, which makes them one of the most popular dog breeds in the United States.

Where do Yorkshire terriers come from

Originally they were bred in Yorkshire England for which they were named for.

No one knows for sure what breeds led to the Yorkie but they are believed to come from different terrier breeds including the Waterside Terrier, the Old English Terrier, and the Clydesdale Terrier.

Yorkies have since been used to develop other breeds including the Silky Terrier and most recently the Biewer Terrier.

In the early 1900s, people started breeding Yorkshire Terriers specifically for show purposes. At this time, the American Kennel Club did not recognize any specific type of dog as being superior over another so all types of dogs were allowed into shows.

However, after several years of showing, AKC recognized the Yorkie as having distinct characteristics that set it apart from other breeds.

What are the traits of a Yorkshire Terrier?

This spunky personality has earned the Yorkie its nickname, “the tomboy toy.” The breed standard references the breed’s trademark confidence and courage, saying, “The dog’s high head carriage and confident manner should give the appearance of vigor and self-importance.” Because of these traits, Yorkshire Terriers do well at everything from dog sports, like agility, therapy work and makes them great travel companions as well as family dogs.

Yorkshire Terriers have an excellent sense of smell which makes them very good at finding their way around the house or yard. They also love exploring new places so they can easily get lost if left unattended.

Because of these traits, most Yorkie puppies do best when kept indoors until they reach maturity. If your puppy does like to explore outside, make sure he wears his identification tag on him at all times. It’s also recommended that he be microchipped in case he loses his tags. You should also keep him away from other dogs while outdoors.

How do they get their name?

What are some common health problems associated with Yorkshire Terriers?

Yorkshire Terriers can be prone to hip dysplasia which causes pain when they walk or run. The most serious problem however is epilepsy.

You can read more about Yorkie health issues here.

Most famous Yorkshire Terriers in the world

Huddersfield Ben and the Yorkshire Terrier

Famous People and their Yorkies

Other Interesting facts about the Yorkshire Terriers

1. The name “Yorkie” comes from a town in northern England where many of the original breed was born.

2. Although most Yorkies weigh between 6-7 pounds when fully grown, some can reach 20 lbs!

4. Some Yorkies will grow hair on their feet but others don’t.

5. Because they are such small dogs, they make great pets for older children who want something smaller than a cat or larger than a rabbit.

6. Many owners say that Yorkies are easier to train than other breeds because they love attention and affection.

8. Teacup Terriers are a myth.

Teacup Terriers Are Full-grown Yorkshire Terriers. There have been many myths surrounding the teacup terrier over time. One such example was that they were bred from dogs who had been given tea by their masters. Another belief held that these dogs would only drink water if there was no other option available. These beliefs are not true at all! In facts, the caffeine in tea could kill a yorkie.

The truth is that the teacup terriers we see today are descendants of working dogs that originally came from Europe. They were developed specifically for use as companions or guard animals.

9. Teacup Yorkies is just a marketing ploy some breeders use to sell very tiny yorkies, under 4 pounds. Though adorable, these tiny Yorkies often have many health problems.

If you want a loyal friend who loves playing fetch and chasing balls then look no further than the Yorkshire Terrier. These little dogs are great companions and fun-loving pets. However, be aware that some may find being confined inside too boring so don’t expect them to stay cooped up for long periods of time. Also remember that although they are generally easygoing, they still need plenty of exercise every day.

Hi I'm Cathy and I have adored Yorkshire Terriers since I was a child. I have lived with dogs all my life and have had many jobs working with them as a kennel worker, a dog groomer, a pet hotel clerk, and as a dog breeder. Now I just write about them and I'm a dog mom of 4 sweet pups. You can read more here.